The Most Effective Press Release Format 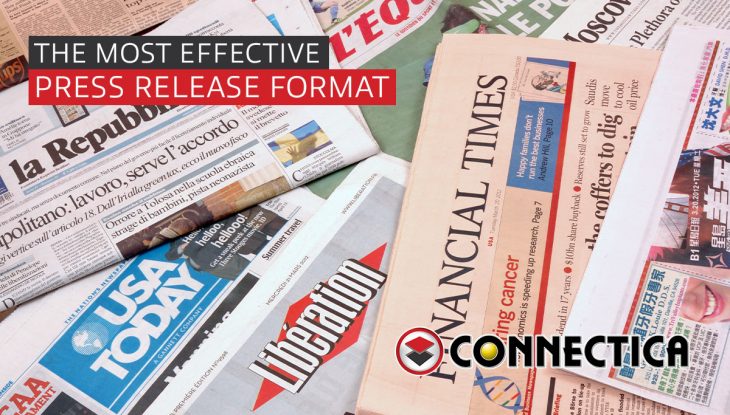 Writing a press release is an essential part of communicating news to your audience. Whether a new CEO has joined or a new product is launching, marketers need to know how to communicate breaking information in the most efficient way possible.

What Is A Press Release?

Now that we’ve established the purpose of a press release, here are some steps to formatting the most effective press release from top to bottom.

The first and most obvious step is to focus on a newsworthy event or announcement. You don’t just want to write about nothing – your audience and the media will likely not engage with it or promote it. Explain why this event or announcement is important – is it a departure from past practice, does it introduce something that the community has never seen before? Spell it out for your audience, and the press is more likely to pick it up.

You’ll want to hook readers’ attention from the get-go, beginning with the headline. You don’t need to write anything too flashy or outrageous, but a concise preview or summary of the most important information will keep people reading. Use active voice over passive voice and strong verbs. Keep it brief but informative enough that people will want to keep reading. You want to continue this concise language in the lead sentence, also called the hook, and explain the headline, introducing the most newsworthy information at the top. The rest of the article should take the form of the inverted pyramid.

In journalism, the inverted pyramid is a hard-news style of writing that puts the most important information first. Think who, what, where, when, why, and how. You want to model your press release the same way. You don’t have to cram all this information into your first sentence. However, you should try to communicate the most important information as early as you can without overwhelming your reader. Short, simple sentences are often as effective, if not more effective, than long sentences with multiple clauses that explain everything all at once. People should be able to skim the article and get the most information right away, with less essential information introduced later on.

The press also fixates on good quotes from company or community stakeholders in your story. They don’t want the information only – they want to hear what people have to say about it. If you give that to them in the press release, news outlets are more likely to pick up the story. Once you get the most important information out of the way in the first couple paragraphs of the press release, introduce a quote or two. This could be from the president of the company or an executive. Or it could be from a community member who has a stake in the recent announcement. Get an authentic and vibrant quote in there! You may end up seeing the quote featured in the next day’s paper. Good quotes increase the likelihood that journalists will pick up your press release and link back to it. That’s a double win. Backlinks boost search engine optimization (SEO).

A boilerplate toward the end of the press release gives a description of the company and some important business details. Like the rest of the press release, remember to keep the boilerplate brief. Journalists who’ve never heard of this company should be able to figure out exactly what the company does by reading the boilerplate. Stick to layman’s terms and highlight a few important points. This includes information such as the company’s recent growth, its mission, who it reaches, or its relevance to the community. After the boilerplate, give the contact information for the media liaison or communications person for the company. This is the person who reporters can speak to for more information.

If you are looking to take your press release game to the next level and want some help, Connectica LLC is here for your digital marketing needs. Our expertise ranges from SEO to social media to web design, and many areas in between. Contact us today at 1-877-816-2259 for more information.

How To Write Press Releases & Why They Are Important
What Does An Effective Content Strategy Look Like?
Effective B2B Marketing Strategies
PREV Tips For Creating Engaging Images For Social Media Marketing
Our Favorite WordPress Plugins NEXT